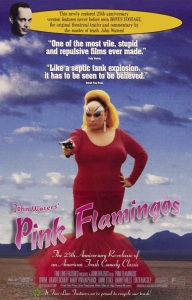 John Waters was the guest of honor at this year’s /slash filmfestival. One evening, they showed four of his most famous movies back to back, and I watched two of them. Beforehand, I expected to struggle through “Pink Flamingos” and was sure that “Female Trouble” would be more to my liking. Ultimately, though, it turned out to be the other way around. Despite the fact that “Pink Flamingos” relies heavily on shock value and tries to rattle the “establishment”, it did so with such an amount of charm that despite a couple of unnecessary icky scenes (Divine eating dog poo, the sex scene with the chickens – yes, I know, they ate them afterwards, but still the way they died didn’t really look very pleasant, and constitutes animal abuse) I found it hard to fault it for that. It offers plenty of weird, memorable characters and a couple of gloriously silly scenes and funny quotes (“What a day for an execution.”, “The couch rejected me!”, and, my favorite, “There are two kinds of people: My kind of people, and assholes.”) I also enjoyed the little commentary by Waters himself at the end of the film (shot and added in the 90s), where he presented a couple of deleted scenes. Granted, apart from Divine (who’s really good and has tremendous screen presence) the acting mostly isn’t anything to write home about, despite its short runtime it could have been even a little shorter, some (running) gags wear off rather quickly, and it’s obvious that this was shot for an amount of money that on other productions probably wouldn’t be enough to afford just one trailer. But it’s laudably anarchistic filmmaking that offers an experience that you couldn’t have had anyway (or -where) else. Overall, I was pleasantly surprised by how entertained I was, especially considering the fact that movies that rely mostly on shock value usually aren’t my cup of tea. This, however, to my own surprise, largely was.
6/10