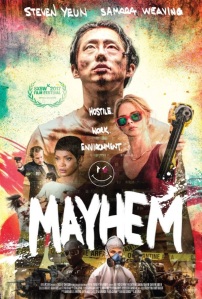 “Mayhem” turned out to be the perfect midnight movie. A funny, entertaining and highly energetic romp from start to (almost) finish, it managed to grip and excite me despite my ailing constitution (due to my cold).

Joe Lynch’s previous feature, “Knights of Badassdom”, wasn’t quite as badass as I hoped it would be, and rather disappointing (I gave it a 4/10). With “Mayhem”, however, he delivered. In spades. It’s a brilliant farce about working in a big, corrupt corporation and slowly selling your soul – until one day, this virus allows Derek to break free in the most violent manner possible. The first scene of the movie was already perfection: The (mostly) black and white photography, the use of a nice, calm classical piece (I don’t mention which one on purpose) which contradicts the violent images on the screen, the slow-motion celebrating said violence – awesome! But even though that probably already was the best scene of the movie, the rest was great too, offering lots of funny moments and pleasantly violent scenes. There’s just something very enjoyable and cathartic about seeing these uptight corporate types let loose in such a wild manner. Also, both Derek and Melanie were very sympathetic characters, which made it easy to root for them. I think it’s great that they cast Steven Yeun (which I enjoy watching anyway) as the lead, without ever making any big deal of his asian heritage. That’s diversity done right. Both he and Samara Weaving were awesome in their respective roles, and really fun to watch (as was the entire movie). The only thing that was a little bit of a letdown was the showdown, which didn’t really compare to the frantic mayhem that came before. Other than that, “Mayhem” proves to be an awesome, very brutal, really funny and highly enjoyable takedown of working in such a terrible workplace. Highly recommended!
9/10