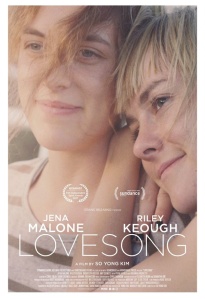 “Lovesong” is a wonderful love story about two friends who slowly realize that they might be more to each other. However, they don’t necessarily reach this conclusion at the same time in their life – which is what the movie draws most of its drama and tension from. The dominating question that looms over the proceedings is: Will both realize their feelings for each other before it is too late?

What I loved most about “Lovesong” was the first half, where those two long-time friends finally meet again after quite some time. Riley Keogh and Jena Malone, two young performers who I’m very fond of, are marvelous in the lead roles, and perfectly portray their feelings for each other, which stem from their long friendship, but might actually be much more. From this “much more”, which at first is mostly hinted at on Mindy’s side, also comes a certain regret and also resentment that stems from not acting sooner, and also the fact that Sarah has a hard time accepting her true feelings for Mindy. I also loved the depiction of Sarah as an overwhelmed mom, since that’s something which we don’t get too often in movies – and if we do, it’s either played for laughs or the character is portrayed as bad mother. However, “Lovesong” makes it very clear that an overtaxed mum is not the same as a bad one (something that I very much appreciated). But being mostly on her own, with her husband travelling around most of the time, Sarah is absolutely exhausted and definitely needs a break – thus exactly what Mindy provides.

However, what for her is just a chance to get away from it all for a couple of days, is so much more on Mindy’s part, who takes a last chance to try that kind of relationship that she – so far mostly secretly – had always hoped for with Sarah. However, at that point in her life, she’s simply not willing to admit her similar feelings for Mindy – or at least, to act on them. After this very strong first half, the movie makes a time jump to five years later. And as much as I understand why that was necessary for the story they wanted to tell, it took me a while to settle in again. It doesn’t help that the wedding preparations aren’t exactly gripping, and that Sarah and Mindy spend mostly apart from each other for a very long time. It’s only when they finally reunite again that the movie once again comes to life, and ultimately reached a conclusion which might not be to everyone’s taste, but which I really liked, and found to be quite touching. If only they would have found a way to make the middle part more interesting. However, with a splendid first half and a couple of really strong moments near the end, “Lovesong” still is a movie that I can recommend without hesitation.
7/10