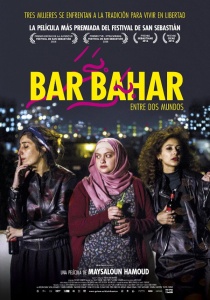 “Bar Bahar” tells the story of three very different Palestinian women who share an apartment in Tel Aviv: Leila, a party girl who falls in love for the first time in a long while. Salma, a closeted lesbian woman who starts working in a bar, where she meets her new flame. And Noor, who adheres to the strict rules religion – and her fiancé – impose on her. On the surface, those three couldn’t be more different from each other; especially Noor stands out from the others. However, over the course of a couple of weeks, they learn to stick together, come hell or high water.

Before we go on, let me state I think that things over here in Europe are far from perfect. During the nineties and noughties, I actually felt like there was some improvement, but recently, it seems like we take one step forward and two steps back when it comes to women- and LBGTQ-rights. I think it’s inconceivable that conservatives around the world are still blocking marriage equality. It really should be a no-brainer. It doesn’t even take anything away from anyone. It’s fucking 2017, why are we even still discussing this? However, “Bar Bahar”, who seemingly depicts the life of these three Palestinian women in a realistic light, paints an even darker picture. Leila’s boyfriend has a problem with her wilder side, and tries to control her more and more. Salma’s parents don’t know that she’s gay, and when they find out, their reaction is about as terrible and hurtful as one could imagine. And Noor is completely repressed by her fiancé, who on top of everything even ends up raping her. This is a world where men’s control over women is still very strong, and while these three women fight against it and at least win some small victories, don’t expect a movie that will have you pump your fist into the air, feeling empowered, and which gives you the conviction that we’re onto a better future. Every small victory is hard-earned, and comes with a price.

However, “Bar Bahar” is more than just an important political and feminist message. It’s also a really good film which gives an interesting insight into the life of young Palestinian women, and/or Tel Aviv. Its three – divisive – lead characters are played extremely well by their respective actresses, the movie is equally well directed by Maysaloun Hamoud, and on top of that also offers some catchy music. Alternately funny, touching and disturbing, “Bar Bahar” is a great and significant contemporary feature whose importance is only heightened by the reaction it got in parts of the Middle East, thus proving exactly the point Maysaloun Hamoud set out to make with it. If you are even somewhat interested in the topics that are touched upon here, this movie is not to be missed!
8/10