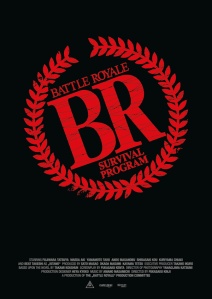 Battle Royale
Japan 2000
Written by Kenta Fukasaku, based on the novel by Koushun Takami
Directed by Kinji Fukasaku
Watched on 03.04.2017

More than 16 years after its release in Japan, “Battle Royale” is finally going to be freely available in its uncut form in Germany – something the new distributor (who submitted the request for a new evaluation at the german ratings board) is going to celebrate with a limited theatrical release. And even though here in Austria we didn’t have the same problem and the Uncut DVDs and Blu-Rays were sold freely for years now, I somehow never came round to see it. Which is why I jumped at the chance to watch a screener of the new german release – and what can I say: I think that it’s still relevant, shocking and effective as hell.

I really liked the “Hunger Games”-movies, which – like the books they were based on – of course were heavily influenced by Koushun Tamaki’s novel and Kinji Fukasaku’s adaptation. Even though the similarities are striking, I still believe that ultimately, Suzanne Collins delivered more than a simple rip-off. She took the basic idea and made something new (and bigger) out of it. However, if there’s one aspect where the “Hunger Games”-series absolutely pales in comparison, it’s the violence. Where “The Hunger Games” held back in order to secure a PG-13 rating, “Battle Royale” shows no such restraint. It’s a bloody, gory and absolutely brutal affair. It never downplays, let alone celebrates the various fights, but presents them as absolutely harrowing – just as it should be, especially given the fact that its bloody 15-year-olds who slaughter each other. I also loved how “Battle Royale” shows the different ways in which those teenagers deal with the desperate and hopeless situation they find themselves in. Some give up and choose to kill themselves. Some seem to bury their heads in the sand, instead of facing the fate that awaits them. Some try to fight the oppressive system that forces them to kill each other. Some try their best to hold on to their humanity, even in the face of unspeakable horror. And then there are those who thrive and flourish under these circumstances, and relish the chance to finally set their inner psychopaths free. With all these different approaches, the movie ultimately forces the viewer to ask themselves how they would react if they’d find themselves in this terrible situation. How far would we go to save our own skin?

There’s another thing that makes “Battle Royale” even meaner than “The Hunger Games”: Instead of fighting against people of other districts which they didn’t know before (apart from the one companion from their own), “Battle Royale” sets the pupils of one class at each other. And even though I’d wager that none of us liked all our other classmates, there are still cliques and friends and even lovers here, who are forced to fight against each other. Somehow, this seems even worse than just fighting a random bunch of strangers. Overall, “Battle Royale” does a great job taking this fascinating and distressing concept and running with it. It’s very well shot, the classical music as well as the original score suit the movie incredibly well, the acting is (mostly) really good, and the action, as shocking as it may be, is also shot quite nicely. However, there’s one thing I didn’t much care for, and that is the rather one-dimensional and clichéd main bad guy – who stands out even more in such an – otherwise – unique and original movie. He’s just your typical sociopathic nutjob, who cheats his way into this battle. Personally, I would have found it much more interesting to follow a regular classmate (like no. 1) who, thanks to the unspeakable horrors he witnesses as well as the imminent threat to his own life, is slowly driven into madness. Instead, said guy already arrives at the island completely off-the-rails. Also, the fact that the movie doesn’t even try to disguise his role as the main bad guy made his fights quite uninteresting, since we already knew that he’d come out on top. For me, that was the one major mistake which hurt the movie a little bit. Other than that, “Battle Royale” is a highly fascinating, very entertaining and truly disturbing movie which offers an intriguing – and shocking – reflection on society that should leave just as much of an impression as its no-holds-barred depiction of violence.
9/10