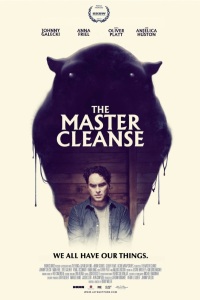 A word of warning: Even though a couple of monsters appear over the course of the movie, this is not a monster movie per se. If that’s what you expect, you’ll inevitably end up disappointed. Instead, it’s a surprisingly quiet and subdued affair that deals with our inner demons in a nice (albeit not exactly subtle) way.

Granted, the movie – and its message – are not exactly revolutionary, and in the way it externalizes and materializes our inner, darker feelings and negative emotions and tendencies, it’s rather on the nose. However, I for one liked what it had to say about these topics, that in the beginning, our darker impulses seem cute and appealing, but the more and more we feed them, the bigger, uglier and more dangerous they become – until they threaten to swallow us whole. Yes, it’s not exactly new or especially deep, but I liked it nonetheless. I was also glad that the movie avoided the cliché of the mad scientist. While the cult and their practices may seem questionable at the beginning, it turns out that they have no ulterior motives, and really only want to help people. And once the shit hits the fan, Ken and his assistant do their best to contain the damage, and to save their “patients”. That was quite refreshing. Acting-wise, it was also really nice. Johnny Galecki (aside: I don’t watch “The Big Bang Theory”, so I had no prior connection to him or his work) gives a good central performance, even though he’s ultimately a little outshined by the superb Anna Friel. Anjelica Huston is also great as the shady leader of the resort, while Oliver Platt plays uber-guru Ken Roberts as a surprisingly sweet and benign man. The creature design was also great, and I loved that they didn’t rely on CGI, but used real puppets. And in a year where so many /slash-films overstayed their welcome, it’s nice to get one which not only rolls the credits after less than 80 minutes, but also doesn’t miss the exact right moment to come to an end.

Mind you, I understand everyone who expected something else, and would have wished for a little more tension, horror, and monster action. But while it admittedly didn’t exactly blow me away, I found it to be quite interesting and entertaining.
6/10