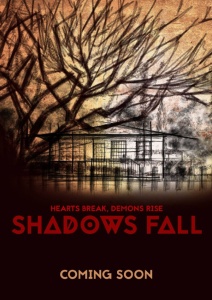 First of all, sorry for the unplanned hiatus. I’ll continue my slash-reviews within the next couple of days, and will then follow suit with my reviews for this years Viennale (which is already coming to an end). But before I resume my festival-reviews, I have one for a screener that was kindly offered to me by the movie’s director, Aditya Vishwanath: The upcoming indie-horror-drama “Shadows Fall”.

I have to be honest: For the first couple of minutes, I had a strong feeling that this wouldn’t be my kind of movie. “Shadows Fall” starts off extremely mysterious and erratic, with overbearing voice-over commentary and dream-like images, and for a moment, I feared that the entire movie would be this way. Thankfully, that turned out not to be the case; nevertheless, the first couple of minutes were a little hard for me to sit through. While I’m at it: It’s definitely noticeable that this is very much an independent feature. While Aditya Vishwanath’s direction is really commendable (more on that later), and the movie is very professionally shot, the lack of budget is noticeable here and there. Overall, they did a fantastic job with what little they had, but if you’re only used to high-gloss and -budgeted Hollywood fare, it will probably take a while to adapt. Also, the acting is a little uneven. While Dylan Quigg does a fantastic job in the lead role, Jener Dasilva was a little bland, and Christian Wennberg never really registered as a demonic, menacing presence for me. And after doing a great job with giving us little bits and pieces of information during the movie, the filmmakers unfortunately felt it necessary to have it all spelled out to us near the end. A little bit more trust in the ability of the audience to figure it out for themselves would have been nice.

Other than that, though, “Shadows Fall” is a very impressive effort for such an indie-horror-movie. I really liked the story, which starts to reveal itself after the first couple of minutes. After a while, you have a pretty good idea of what’s going on there, and I found that concept to be really interesting. I won’t go into it, since I don’t want to spoil the surprise – part of the fun of “Shadows Fall” is to figure out for yourself what’s going on here – but I really liked the basic idea behind it, which deals with grief, how we deal with a terrible loss, and what we would do, and give, to be with the one(s) we love. As I already said, it’s also shot really well. Granted, the directiorial style won’t be to everyone’s liking, but since I love slow motion-scenes that really draw you in, it was right up my alley. One (slow motion) shot during the middle of the movie, which gave the impression of having been shot within a single take, was especially impressive (even though there were probably quite a few cuts hidden in there, but as long as they are not noticeable, I don’t mind). The effects also were very nicely done (even though whenever I see black, moving smoke – or in this case, shadows; but it still pretty much looked the same – I always have to think of “Lost”). And when it comes to the depiction of hell, they really used their tight budget to their advantage, offering a couple of very surreal scenes that I also enjoyed very much. It all boils down to a great ending that, again, I won’t give away, but which I liked very much. Overall, I’m very glad that I got the chance to see it. If you are tolerant towards low-budget, independent features, I would definitely recommend giving this nice little romantic horror tale a chance.
7/10