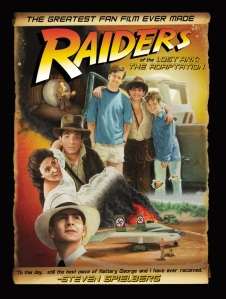 “Raiders of the Lost Ark: The Adapation” is an incredibly charming tribute to one of the greatest films of all time, made with a lot of ingenuity, love, as well as blood, sweat and tears. That a couple of kids did this over the course of seven years during their vacations, is just stunning.

What I loved most about it are the often ingenious solutions that they came up with for those scenes that they weren’t able to copy par for par. I am not going to give anything away (and would really advise you to not watch the documentary beforehand, in order to not spoil the surprise), but I’d like to point out that I thought their solutions for the map-scenes, the seaplane at the beginning as well as the monkey especially brilliant. Those, as well as many other ideas that they came up with, really had me laugh, clap and cheer frequently. The entire movie in general is almost as gripping as the real one. Not so much because of the story – which, of course, is well known – but because you’re constantly wondering how they are going to pull of the next scene, which really makes this quite exciting. And even though it did throw off a couple of people (whereas I was prepared, since I knew about it; I actually contributed to said Kickstarter-campaign), I loved the plane sequence, which, as you may know, was that one scene that they never could figure out back then, and which was shot 30 years later. And instead of trying to retain visual continuity with what they shot back then, they – like they did in the 80s – used the best technology available to them. Thus, you suddenly have this scene that might very well be right out of a modern blockbuster thrown into the mix – and I loved it, because a) it shook things up, and b) it’s a testament to the technological advances of the last 30 years, and how much easier it is nowadays to shoot high-quality fan films. Now, of course, what they did back then was, in parts, highly irresponsible, and there will be certain moments (like the fire-scenes, or the truck-chase) that gave me pause. You really can’t let yourself think about what could have happened to them. And as funny and entertaining the rest of the movie is, the dialogue scenes are somewhat of a chore to sit through, since they are the least interesting moments from a “how did they pull this off?”-point of view. And, obviously, those kids aren’t exactly the best actors (even though I have to say that I was quite surprised at the level of acting talent Eric Zala showed in his scenes as Belloq; and Rodriguez was quite good as Marian too). But the next moment of ingenuity and dedication is never too far away, and overall, I can only raise my Fedora to everyone involved.
8/10