At the Movies 2016: Captain Fantastic 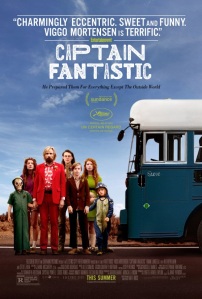 “Captain Fantastic” was sweet, but not unproblematic. However, before we get into that – and thus, ultimately into (light) spoiler territory, let’s first talk about the good stuff. Viggo Mortensen – as always – is great as strange, but determined, father who fights his late wife’s parents in order to give her the funeral that he knows she would have wanted. The rest of the cast – especially the children – were great too, though. The whole movie is very entertaining, and features many funny moments, but also a couple of more serious, subdued and/or touching scenes – which I both enjoyed equally. As much as I can enjoy the silliest and slightest of comedies, if they also happen to have a little meat on them – like “Captain Fantastic” – that’s very much appreciated. The entire movie is very sweet and charming, and the soundtrack was really nice, with the tracks by Sigur Rós standing out as especially beautiful. And even though I’m not fully on board with Ben’s choice of parenting (which we’ll get into in a second), there were definitely a couple of things that I found noteworthy and/or commendable, and which I’ll try to remember when/if I should ever end up having kids myself.

However, I have to say that I had my problems with Ben’s parenting in general, and especially the way the movie seemed to glorify what he’s doing. Granted, there’s the occasional moment that dares to question if what he’s doing is right, and which deals with the problems that inevitable arise with such an extreme, alternative life style. It’s also clear from scenes like the one in the diner that the kids are totally unprepared for the everyday world, a fact the movie isn’t glossing over. And yes, in the end, he makes a couple of adjustments, like sending them to school, so that they won’t be as isolated anymore. Overall though, I couldn’t shake the feeling that from the two very different – and extreme – ways of life (and growing up) presented here, Matt Ross very much is in favor of what Ben is doing. Let’s take, for example, the dinner scene, where Ben’s kids are very polite, while his sister’s kids act like brats. Or the next morning, when his youngest daughter shows off her education. The message is further driven home by the fact that his late wife’s parents are presented as the villains here, ignoring her late daughter’s wishes of how she wants to be laid to rest, and trying to take the kids away from Ben, whom they seem to detest pretty much from the beginning (let us not forget that Jack threatened to call the police if he dares to show up at the funeral). And even though there are definitely a couple of things about the way that Ben raises his children that parents should take note, like getting them out into nature, trying to feed them as healthy as possible, not relying entirely on the public educational system, and striving to tell them the truth about things even when it’s difficult, I had a hard time being on “Team Ben”.

If you, for yourself, decide to lead such a life, that’s fine. More power to you. It get’s more complicated, though, once children enter into the equation, since they don’t get a choice in the matter – and even if they had, they don’t have the necessary information to make a qualified decision. Living like this is all that they know. I always find it problematic when parents force their own lifestyle, religion, and what not, onto their children – which is exactly what Ben does. Because of that, I would have prefered it if “Captain Fantastic” would have ended with his kids staying with their grandfather, while Ben drives off on his own. The fact that Matt Ross had the children sneak onto the bus and wait in a tiny compartment for a couple of hours (which felt rather contrived and implausible) – including the one son who before was allowed to be critical about his father – only further affirmed my belief that Ross is very much in favor of what Ben is doing. And that’s the part of the movie I had a problem with. I simply would have prefered a more balanced reflection on both styles of parenting shown here, and a closer inspection of the possible problems and dangers of Ben’s approach (for example, even though he ends up sending them to a public school, with their very peculiar upbringing, they are bound to be outsiders; something that is skilfully glossed over by the fact that during the movie, they always have each other, and it seems like that’s all they want and need). Other than that, “Captain Fantastic” was a very sweet, entertaining, and occasional touching family dramedy about the loss of a wife/parent, and the struggle of those who stay behind to deal with this loss and continue their lives.
7/10