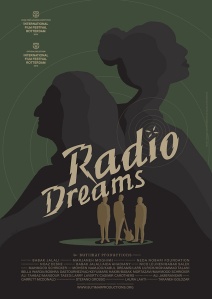 “Radio Dreams” was the Viennale surprise preview at this years “Kino wie noch nie” open air-festival, and I have to be honest with you: If I would have known in advance what they were going to show, I wouldn’t have watched it. Currently, I’m simply not in the mood for ponderous, gloomy, heavy and/or artsy films, preferring livelier and more mainstream stuff. Thus, when reading this review, please bear in mind that there’s a slim chance that I would have liked it better in October, during the actual Viennale (assuming my taste is going to shift again until then).

While not a bad movie, I’m afraid I didn’t have much use for it. What I enjoyed was its portrayal of Iranians living in the US, the struggles of a local radio station that’s catering to a very specific audience, the constant conflict between commercial and artistic interests, as well as the stories that Hamid told on the radio (albeit they were a tad too long, and also often without a satisfying conclusion). I also liked the basic idea within the movie of bringing the first rock band from Afghanistan and Metallica together, in order to encourage cultural exchange, understanding, and thus, peace. Overall though, there was little here that really grabbed my interest. The movie pandered along at a leisurely pace, some stuff (like everything about the guy that tries to talk the singer into starting a wrestling career) was too weird for my taste, and most of the humor also fell flat for me. Thus, despite its short running time, I got bored rather quickly. It’s never a good sign when a movie fades to black and you’re hoping that this will be the end (alas, in this case, it wasn’t, but at least the epilogue only lasted 2-3 minutes). So ultimately, as much as I might appreciate it from a cultural diversity-angle, I didn’t really get the point.
4/10