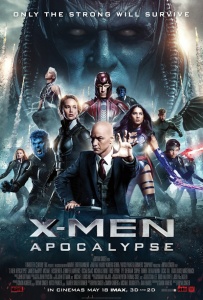 I understand the lukewarm reception that this movie got by critics as well as the audience. In a year that’s full of superhero movies – many of which offer something distinctive (like “Deadpool”‘s R-rated brutality and humor, the superhero-mashup “Captain America: Civil War”, or the clash of two of the most iconic superheroes ever in the – ultimately inferior – “Batman v Superman: Dawn of Justice”), “Apocalypse” feels somewhat stale. We’re a little surfeited by these kinds of movies by now, and especially in a year with such an oversupply, this “more of the same”-offering just will be this one – formulaic – movie too much. One might even say that, even though it’s a better movie than “Dawn of Justice”, it’s ultimately less remarkable. Nevertheless, I’d argue that even though it’s nothing special, that’s a long way off from it actually being bad.

Granted, even apart from the fact that the movie is content with walking on well-trodden paths (hell, even the predecessor – which “Apocalypse” falls short of – offered something special, with the meeting of the X-Men generations), this most recent outing of the “X-Men”-franchise isn’t perfect. There are so many characters by now that it’s inevitable that some of them will fall by the wayside. The bad guy is as clichéd and unimpressive as can be. The “We have to save the world!”-plot couldn’t be any more generic (seriously, smaller stakes from time to time really wouldn’t hurt). The CGI-destruction-sequences of entire cities are so common by now that, even when they’re done well, it’s simply dull and tiresome. Also, by now, the continuity of these X-Men-movies is pretty fucked up; better not try to make sense of why this is happening here, but arguably didn’t happen in the original timeline. Then there’s the age of some of the characters. Not even taking into account scenes from movies of the earlier timeline (where thew showed Jean Grey, in the early 80s, as a young child), some of the ages simply don’t match. Xavier, Lehnsherr and Raven (ok, granted, she at least can adjust her appearance at will) don’t look that much older from their first appearance in “First Class” (even though almost twenty years have passed), and on the other hand, it’s difficult to see them age into their characters from the first “X-Men”-movie in less than two decades. And don’t even let me get started on the whole Nightcrawler-business. And finally, I can’t decide if the jest about weak third parts of trilogies was meant as self-mockery, or as yet another dig on “Last Stand”.

However, there are also a couple of things that Bryan Singer does right that many other directors could take note of. For example, even in the biggest mayhem, his focus is always on the characters. Despite everything that goes on around them, as colossal, important, urgent and apocalyptic as it might be, he always takes the time for these little, sometimes quite touching moments where everything slows down and becomes quiet, and suddenly, it’s all about the characters and how all of that affects them. Which is exactly why, despite all the other, generic shit that went on around them, this never felt like a soulless CGI-fest. Contrary to some other movies (like the otherwise superior “Civil War”), “Apocalypse” also made good use of 3D again, with a couple of nice shots that benefited from the extra dimension. There were a couple of standout-moments (like – as with the predecessor – the hilarious Quicksilver-scene), I really liked Bryan Singers calm(er, compared to some of his competitors) direction, John Ottman’s score was more than solid, and the cast – inasmuch as they actually got something to do – was really good. Probably the best part of the movie, however, once again was everything about Erik Lehnsherr. When we first see him, he left Magneto behind, and leads a new life with his wife and his young daughter. Of course, we immediately know that things will turn sour very quickly, but that doesn’t make said turn any less tragic and/or devastating. It also provides Magneto with an understandable motivation (compared to Apocalypse, who simply wants to destroy the world, because… reasons!). Ultimately, Lehnsherr/Fassbender ist the heart and soul of this movie, and without him, “Apocalypse” would be considerable inferior. As it is, it’s hardly revelatory, and offers standard fare that isn’t going to wow anyone. And if you’re already sick of these formulaic superhero movie, than this is not for you. However, as someone who is a fan of the genre, and can still enjoy even the most generic offering, as long as it’s done well, I have a hard time condemning it. Yes, it may be as run-of-the-mill as they get, but if you’re a fan of the series, you should find enough here to keep you entertained.
7/10

1 Response to At the Movies 2016: X-Men Apocalypse