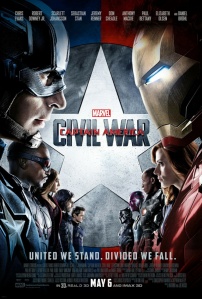 Dear Warner/DC, have a look. That’s how you do it! While I’m not one of those who absolutely hated “Batman v Superman”, I definitely was disappointed by it, and especially held against Marvel’s similar superhero clash, it completely pales in comparison. And what’s probably the most infuriating and frustrating thing for the Warner/DC-folk, when they compare their own effort to this, is how effortless it all seems. The Russo brothers and their scriptwriting team make it all look so easy, like it’s nothing that they’re juggling all those superheroes who, in their latest struggle, come head to head. Pardon the pun, but that was absolutely marvel-ous.

I don’t want to turn this solely into a comparison between those two movies – and thus, ultimately, a “Batman v Superman”-bashing – but allow me to emphasize one crucial element where “Dawn of Justice” failed, and “Civil War” shines: character motivation. In BvS, everything feels rather forced, ultimately culminating in the already infamous “Martha”-scene, which is unintentionally funny to such an extent that all tension that they might have built up before completely evaporates instantaneously. Here, on the other hand, we always understand why everyone’s doing what they’re doing. Even though Tony Stark and Steve Rogers end up on different sides on a certain matter, both their positions are plausible and relatable. Hell, the same can even be said about the villain – who, while similarly orchestrating the conflict, works sooooo much better than Eisenberg’s Lex Luthor did – which is exactly what makes this one so interesting. There are no easy answers for the questions raised here. Not for the characters, and not for the audience. Here’s the next thing: While “Batman v Superman” (and I swear, this will be the last time that I use that movie as a reference in this review) orchestrated the titular fight as cool and spectacular, and as something that the audience was supposed to cheer on to, when Captain America and Iron Man ultimately face off, we don’t even want them to. We’d rather have them kiss and make up, and continue to fight side by side. Which is one of the many reason why “Civil War” works where “Dawn of Justice” failed. “Civil War” also does a great job giving each and every one of its heroes their due. They all get at least one moment in the spotlight, where they can really shine. Obviously, the movie also profits from the fact that by now, we know most of them. We followed many of them for years now, and thus feel a certain connection to them. However, they also do a great job introducing some new blood, and doing so in a way that feels organic, and that actually makes them relevant to the plot, and/or the themes that the movie deals with.

Granted, it’s not perfect. The first action sequence feels very familiar and interchangeable (at least up to a certain emotional scene that serves as catalyst for everything that happens afterwards), the action, while mostly comprehensible, wasn’t shot quite as clear as I’d like (at least apart from some signature moments), the pursuit through Berlin felt unnecessary long, the promo material gave away too much (like where everyone stands; would have been nice if we could have found that out for ourselves), and even though there’s a lot of emotional weight throughout the movie, ultimately, I missed a great, big, persisting change in the status quo – which, looking back, gives all the drama that happened before the impression of being nothing more than smoke and mirrors. However, that’s nothing that you’d note while watching the movie, and thus it has no real impact on its entertainment value. And entertaining it sure as hell is. Even though it’s the longest Marvel-movie so far, said length feels earned and appropriate. There’s just so much going on, so many characters to handle, and a lot of action, tension, intrigue, drama, and – of course – humor, that it’s hard to even notice the movie’s very few shortcomings, mentioned above. And while the showdown in Siberia definitely was the emotional and dramatic climax of the movie, by far my favorite part was the prolonged fight between the superheroes on the german airport. That sequence was just absolutely exhilarating, with all those superheroes fighting together as well as against each other. For me, this action scene is the pinnacle of superhero battles in movies so far – and it’s a gold standard that will be tough to match, let alone beat, in the years to come.
9/10