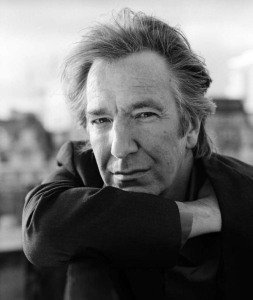 I’m afraid that at the moment, I don’t have sufficient time to write an eulogy befitting to an actor of Alan Rickman’s stature, so you’ll have to make do with a couple of hastily cobbled together words, I’m afraid. Just as many others, I suspect, I first made Alan Rickman’s acquaintance when he played Hans Gruber in arguably the best action movie of all time, “Die Hard”. Only that when I saw it back then, he actually played Jack Gruber, since for the german dubbed version, they decided to make the terrorists english (possibly being afraid that germans might be offended by german terrorists). But even then Gruber stood out against the plethora of action movie villains, and while the script arguably also played its part in that, in my mind there’s no denying that Alan Rickman’s performance also was a huge part of that. With Hans Gruber, he gave us one of my all-time favorite screen villains (even though his german was occasionally unintentionally funny, like “Schieß den Fenster”), and for that alone, I’ll always remember him fondly.

The following 25+ years saw him play many different roles that showed his versatility. Sometimes he was the hero, sometimes he was the villain, and sometimes he at first appeared to be the villain only to later emerge as probably the true (tragic) hero of the piece. With the latter, I’m obviously referring to “Harry Potter”, the series that probably most (younger) movie fans will, first and foremost, remember him for. I only read the books once I saw all the movies, so when I watched them, I had no idea where this was going – but from the beginning, I always had the feeling that there was more to Professor Snape than met the eye. This subtext may also be found in the novels, but I credit Alan Rickman for bringing it from page to screen and making it noticeable even for someone who hadn’t read the novels before. Other than that, and despite his varied roles, I’ll probably mostly remember him as Alexander Dane aka Dr. Lazarus from “Galaxy Quest”, where he took a character very loosely based on Leonard Nimoy and made him the real star of the movie (at least in my mind). He has this great arc starting out as someone fed up with his role, until in the end embracing it, delivering the most emotional line (which until then had only been a joke) of the entire movie.

I’ve never met him, obviously, so I can’t speak to his personality myself, but if others are to be believed he was a very kind, smart and thoughtful man – which matches my impression of him. Either way, I always found his work to be very impressive. At the age of 69 (seriously, fuck cancer) I feel that he left us far too soon, and I am saddened by the variety of performances that he might have given us in the upcoming years that we were thus robbed off. Which obviously, though, is a very minor loss compared to that which his friends and family have just suffered. I can only hope that they’ll find a little consolation knowing that, wherever he is now, it’s a place that’s better off for having him.

This entry was posted in Eology and tagged Alan Rickman, Rest in Peace, RIP. Bookmark the permalink.