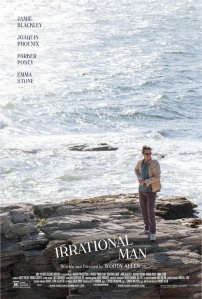 After last years very charming “Magic in the Moonlight”, I’m afraid that I’d personally rank “Irrational Man” among Woody Allen’s lesser works. Which is not to say, though, that it’d be without its merits. The cast is very good, with the exceptionally charming Emma Stone once again a particular standout. There are a couple of quite funny scenes, like when they swap murder theories during dinner. There’s also a nice streak of dark humor throughout the movie that I enjoyed quite a lot. It was also interesting to see that “Irrational Man” continued the theme at this years Viennale of (male) potbellies (maybe they come back into fashion? Since I’m too lazy to go to the gym, I’d be very much ok with that). And the murder was so well planned that I’d really start to worry if I’d be on Woody Allen’s blacklist.

Unfortunately, all of that doesn’t really help much when you find yourself not liking any of the main characters. I didn’t feel any kind of connection to either Abe nor Jill. Abe started off pretty insufferable with his constant whining and his “I’m so sick of life” attitude. When he went on his dark path, he started to get a little bit more interesting, but because of what he did, I still couldn’t really relate to him, and thus followed his development as an uninvolved observer. As for Jill, the way she lied to her boyfriend and even rebuking him because of his jealousy (which, as it turned out, was totally warranted in this case) until ultimately cheating on him, didn’t really win her any points with me either (it didn’t help that when I looked at Roy, I pretty much saw myself; a nice, kind and good-natured fellow). And as much as Stone sells Jill’s infatuation with Abe, there wasn’t really any chemistry between her and Phoenix (especially when compared to her scenes with Colin Firth in “Magic in the Moonlight”). And even though it got never boring, I never found the movie particularly gripping, and only occasionally funny. Finally, I have to say that Abe’s last dark deed went a little bit too far for me. He always rationalized what he had done before, and in this case, Woody Allen didn’t really manage to make this final leap credible to me. Some may think it was unavoidable, but I just didn’t buy it, and wish they would have taken a little bit more time to explain his reasoning and/or show him struggle with this particular decision. Despite all that, “Irrational Man” is still mildly entertaining and occasionally quite amusing. But unlike “Magic in the Moonlight”, “Blue Jasmine” and/or “Midnight in Paris”, it’s not a movie that I see myself revisiting anytime soon.
5/10