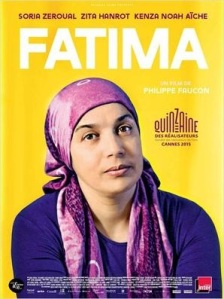 “Fatima” deals with the generational split within (some) immigration families. Fatima came to France so that her children could have a better life – and better prospects for the future – than herself. She works her ass off to provide them with the best education possible, and while her older daughter Nesrine – who starts to study medicine – appreciates that, her younger sibling Souad, who just reached puberty, seems like an ungrateful brat. When one day, Fatima stumbles down the stairs and hurts her arm, healing is not just a physical, but also a psychological matter.

“Fatima” can roughly be separated into two main storylines: Fatima’s and Nesrine’s. Among these, I have to say that I found Nesrine’s story more gripping – quite possibly because while I don’t have kids yet, I can very much appreciate the pressure that goes along with studying (it might be 10 years since I finished my studies at a University of Applied Sciences, but I still remember that time vividly). Thus, it was easier for me to relate to her, than to her mother. What especially got me was the huge amount of pressure that she was under. Studying itself can be hard and stressful enough, but when you know that your mum is working herself sick for you, and sells her jewelry etc., just so that you can follow your dream, the pressure increases tremendously, and I definitely didn’t envy her. Nevertheless, Fatima’s struggle was quite gripping, too, especially because of her troubles with Souad, which further added to her (already substantial) burden. I also liked all the performances, the glimpse into the live of immigration families that it offered (I especially found it interesting that Fatima speaks in her mother tongue, and her children speak french, and they still seem to understand each other just fine), as well as a couple of very strong, individual moments.

There were a couple of things, though, that didn’t speak to me quite as much. For example, as great as Fatima’s poem was in itself, I think I just wasn’t the target audience for it, since she’s kinda addressing it to those who look down on her, which I’d never do. I don’t care if you’re rich or poor, what job you have etc. The amount of money in your savings account doesn’t concern me. All I care about is if you’re a kind person. Everything else is just smoke and mirrors. Thus, this poem wasn’t as eye-opening for me as it arguably was intended to be. More importantly, “Fatima” feels more like a loose combination of individual vignettes, and – apart from Nesrine’s studies – missed a clear narrative and/or structure. I also could think of a couple of questions that would have been interesting to address. For example, I wonder what would have happened if one of the girls would have brought home the “wrong” boyfriend, or even a girlfriend? How would Fatima and/or her ex-husband have dealt with that? And overall, even though I get that it was a character trait (and possibly a sign of her more uptight upbringing compared to her daughters), Fatima was just a bit too quiet, obedient and submissive for me. Despite those minor complaints, though, it’s well worth watching, offering an interesting glimpse into the often difficult and demanding life of immigrants, who do their best to offer their children a better future than they ever could have even dreamed of for themselves.
6/10