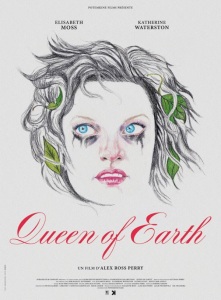 “Queen of Earth” was one of the movies that I looked forward to the most at this years Viennale. So much so, in fact, that I was a little pissed off about the fact that I would miss the first screening because of a birthday party (Seriously, folks: Don’t schedule anything during the Viennale, at least if you want me to show up 😉 ). Fortunately for me – and him 😛 – they showed it again in the afternoon on the following day (which was a national holiday), so I didn’t have to wait too long to finally see it. Unfortunately for me – and the movie – I was rather disappointed by it.

“Queen of Earth” first and foremost is yet another showcase for Elizabeth Moss’ considerable acting talents. Right from the start – in a long scene with Catherine’s devastated reaction to a breakup – she’s absolutely stunning, and even though “Queen of Earth” ultimately might have disappointed me, that’s not in the slightest her fault. She is, hands down, the best thing about the movie, delivering a performance that I seriously hope to get some attention come awards season. Emotionally, she bares it all here, playing an extremely vulnerable, depressed and occasionally vile character that hit rock bottom, and doesn’t seem to find a way out of the hole that she fell into. Katherine Waterston has a far less showy role, but is also really good as her longstanding friend Virginia, who seems to be caught between her desire to help and to get rid of her. There also were a couple of standout moments, where Perry – like in the aforementioned first shot – employs long takes to really draw the audience in, like when Catherine and Virginia walk down memory lane, or when Catherine finally lashes out at the dinner (hands down one of the best scenes of the movie, and a really strong moment for the character). I also really liked its dark and depressing atmosphere. From the get-to, Alex Ross Perry – with help by Keegan DeWitt, who provides a highly unsettling score – manages to make the audience feel what Catherine feels: Extremely uneasy, constantly on the edge, and terrified of what might happen. “Queen of Earth” made me feel uncomfortable from start to finish, and evaluated simply as (emotional) experience, it was great.

Narratively, however, it’s a mess. The individual scenes, as strong as some of them may be, never really added up to anything. It’s also one of those films that go nowhere, and that refuse to provide the audience with any kind of resolution, instead culminating in a highly unsatisfactory open end that had me scratch my head in perplexity, and stomp out of the theatre in frustration. If that was the goal, then: Mission accomplished! Unfortunately, it also left me clueless to what the point of the exercise was supposed to be. Don’t get me wrong, I don’t needed, or wanted, a saccharine scene where they kiss and make up, and/or where Catherine suddenly is well again. But it would have been nice to get at least some sort of conclusion, especially since “Queen of Earth” definitely gave me the impression that it was headed for something, even though I had no idea what this something might be. As much as I loved the acting and the nice, dark, depressing mood, but thanks to the disappointing ending, and the fact that narratively, the movie didn’t really amount to anything, I ultimately didn’t have much use for it.
5/10