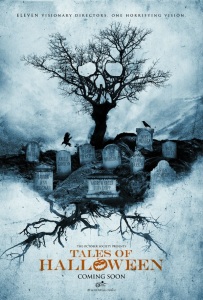 I haven’t seen “Trick ‘r Treat” yet (I know I know… I’m about to remedy that), but I’ve been told that “Tales of Halloween” is cast in the same mould. It sells 10 tales that not only take place at Halloween (as one might have already deducted from the title), but a) on the same halloween night and b) in the same town. Thus, there are a couple of nice overlaps between the individual stories (for example, you’ll see some of the kids who walk around “trick or treat”-ing in multiple segments). As for the stories itself, they’re quite varied in content, style and tone, which probably means that not everyone will love every segment (I know I didn’t) and that different people will like different tales, but also that pretty much everyone should be able to find something that he/she enjoys.

Here’s an overview of all the segments: It starts with “Sweet Tooth”, a nice urban legend-tale about a boy who loves sweets so much that you better leave him some candy on Halloween night, or else…! It’s a nice, old-fashioned scary story, well shot, with a creepy atmosphere and some nice gore. Definitely a nice start of this anthology. “The Night Billy Raised Hell” is an incredibly entertaining little horror comedy about a boy who goes out trick or treating with the devil himself. There’s lots of fun and laughs in this one, at least if you enjoy your humor as black as coffee. Mostly, though, I still can’t quite get over the fact that this, and not the next one, was the one directed by Darren Lynn Bousman – since visually, “Trick”, with its vibrant colors, reminded me a lot of the Bousman-directed “Saw”-sequels. However, rather than him, it had Adam Gierasch at the helm, who also includes one or two quite impressive tracking shots without any cuts. I also loved the setting, the story as well as the twist ending. Overall, it’s probably my favorite segment of this anthology. “The Weak and the Wicked” deals with bullying and stars Grace Phipps, which immediately made me think of “Some Kind of Hate”. It’s well shot and acted, but for whatever reason, the story mostly left me cold. Still, it’s a decent entry. “Grimm Grinning Ghost” is a nice, creepy – albeit run-of-the-mill – ghost horror story with some nice, scary moments and atmospheric shots. It also features Alex Essoe (from “Starry Eyes”) as well as horror’s new go-to elderly woman Lin Shaye. Generic, but quite well done.

“Ding Dong” reunites “The Woman”‘s Lucky McKee and Pollyanna McIntosh. I liked her performance, the general concept and the visual style, but otherwise, it was one of the weaker segments for me. It’s immediately followed by the episode that I liked the least, “This Means War!”. It starts off nice, with this neighbourly war, but it escalates far too much far too quickly. “Friday the 31st” was a fan-favorite of many, and I loved the setup. But once the alien came around, it started to lose me, and then it culminated into this splatter orgy that got tired way too fast. Ultimately, despite the fact that, like the rest, it’s just a short story, it seemed to go on too long for its own good. Things start to look up again with “The Ransom of Rusty Rex”, whose most noteworthy feature is the extended cameo appearance by John Landis. However, I also liked this idea of a kidnapping gone horribly wrong, and the hijackers trying to get rid of their prey. “Tales of Halloween” then goes out with a bang with “Bad Seed”, the only segment where I wished it would have gone on longer, and where I actually wouldn’t mind to see a full-blown movie based on its bonkers premise (even though it pretty much was just an homage to “Attack of the Killer Tomatoes”). In the interest of full disclosure, however, I should point out that it was shot by a director that I admire very much, Neil Marshall, so I might be biased. It also featured the most delightful cameo-appearance of this years /slash Filmfestival, and overall, I really liked the cast, the characters, and the (albeit trashy) concept. I just wish that – especially with Neil Marshal at the helm – it would have ventured into complete mayhem, instead of just hinting at it.

Overall, “Tales of Halloween” is a little bit like the mixed bag of sweets that children come home with on Halloween: Not every piece is a treat, but there’s enough good stuff in here to make the trip worthwhile. It’s rich in variety, thus catering for all tastes, and its blend of scares and laughs should make this a great party-movie for this year’s Halloween.
7/10