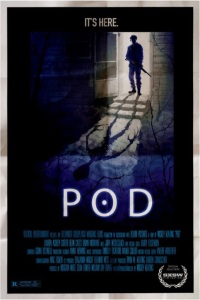 “Pod” is undeniably the single worst movie that I’ve ever seen on a /slash Filmfestival. Loud, hysteric, obnoxious and annoying as fuck, I was this close to getting up and leaving – and in all probability would have done so if it wouldn’t have been the first movie of the day.

One of my main issues with “Pod” was how aggressive the sound mix was. Mickey Keating mistakes “loud” with “suspenseful”, stringing together one cheap jump scare after another, which mostly come totally out of the blue, without any buildup. I guess he wanted to convey terror, instead it just seemed incredibly helpless and amateurish to me. The characters also are far too exaggerated and annoying. Martin was just buck-wild crazy, Lyla was far too hysterical and quickly got on my nerves with her constant screeching, and Ed had the problem that the audience just knew right away that Martin – despite his paranoid tendencies – definitely had some kind of dangerous creature locked up in the basement, which inevitably made him look like a dick. Also, kudos for taking the booze away from your addicted, alcoholic sister, thus forcing her to go cold turkey while sending her into an extremely disturbing and stressful situation. What also got on my nerves was the far too extensive discussion going on after they entered the cabin. Seriously, when you have a guy who claims that he captured something and imprisoned it in the basement, just open up the fucking basement and see for yourself. Case closed. Don’t pussyfoot around for half an hour. It also didn’t help that some of them sometimes had to act incredibly stupid for the movie to progress the way Mickey Keating wanted it to. Disabling the car was especially dumb, and was simply justified with an incredibly lame “Well, that guy’s crazy”.

I also found the whole movie to be incredibly foreseeable, from the question of what exactly Martin has found in the woods, to the twist with the car that Lyla stops when looking for help, up to the way the movie ultimately ended. Also – and granted, with everything else wrong with the movie, that’s nothing more than a nitpick, but I want to mention it all the same – I’m no electrian, but when you turn off a device like, say, a TV, and then you have a short-circuit, and you turn the power on again… why would the previously switched off TV suddenly turn on again? And while we’re at it: From whose point of view was the very last scene of the movie shot? I guess it was supposed to be us, the audience, but plot-wise, it didn’t make any sense. Ultimately, it’s only good scene was the walk into the basement, where they finally, for a couple of minutes, forwent the loud, aggressive and obnoxious approach of the rest of the movie, and let silence reign. And suddenly, for a very short time, the movie worked for me, was tense and suspenseful. It also was quite well shot, with the red light above and the blueish light from the flashlight in the otherwise dark basement. However, in a way, it only made the rest of the movie all the more frustrating, because for three minutes or so, Mickey Keating proved that he would have known how it works. Ultimately, though, the rest of the movie was annoying to such an extent that even this short, single nice scene couldn’t save it for me.
1/10