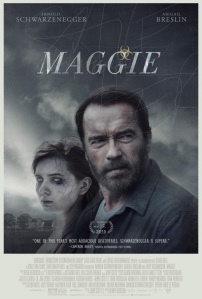 I’m a huge fan of Arnold Schwarzenegger. I own all of his films, and have seen all of them at least once. I do believe that, compared to his “counterpart” Sylvester Stallone – he overall chose the more interesting and ultimately better movies (even though not all of them were great), and I especially like that he really gives his all in each and every film. You will find not a single performance in his career where he phoned it in. There may be better actors than him – but about how many of them can you say the same? Accordingly, I was really looking forward to “Maggie” (as I do to all of his films), especially since for probably the first time in his career, his acting got some real praise. Thus, you’ll be able to comprehend my disappointment when I found out that his newest feature wouldn’t get a cinematic release over here, instead being dumped direct-to-DVD. Also, my faint hope that it would be shown at the /slash Filmfestival turned out to be unwarranted (this is why this now is the fifth and final “Prelude to /slash”-review). Ultimately, I went out to grab the Blu-Ray one day after its release – and together with special guests Harry and his girlfriend – started to watch it. That’s how excited I was about finally seeing it. And while it might not have been the masterpiece that I was secretly hoping for, I nevertheless wasn’t disappointed.

In order to put my opinion of the film into the right perspective you have to know that I’m not only a huge fan of Arnie’s, but also that I love movies in (post-)apocalyptic settings. Because of that, this movie, from the get-go, was already in my good books. I also like it when filmmakers take the – otherwise rather worn-out – zombie-thematic and manage to squeeze new life out of it, by finding a different approach from what we’re used to. Ultimately, “Maggie” uses the zombie-theme to tell a story about a grave and deadly illness, and how hard it is for a father – but also his daughter herself – to deal with that. You probably could have told a similar story about cancer, but the zombie-theme definitely gives it a different spin that makes it stand out – especially since because of it, the longer Wade keeps his daughter with him, the more he puts himself and the other people of the community in danger. Thus, there’s a conflict of interests and of emotions that you wouldn’t have got with a more grounded illness. I also loved the slow pace of the movie. Some may find it sluggish and dull, and I’m certain that a couple of Arnie-fans who expect more traditional Schwarzenegger-fare will be put off by the slow pace, the overall tone as well as the almost complete lack of action. But I for one just loved the fact that it totally defied said expectations, instead offering something that’s so not what you’d picture when contemplating a Schwarzenegger-zombie-flick. I also loved the really dark and depressing mood of the piece. They’re not using the setup for a chase where Schwarzenegger is racing to get a cure, or anything like that. His daughter is dying, and there’s nothing that he can do about it, expect to try to deal with it, make the time that she still has got as pleasant and possible, and then, ultimately, when the time comes, put her out of her misery.

That last part was especially haunting for me. Wade learns that the euthanizing method that they use at the camps is far from painless, which is why his doctor-friend strongly advises him to instead to it himself – quick and painless. Something that Wade, understandably, dreads. It’s bad enough when you have to let go of a close relative in order to spare them more suffering, but to actually pull the trigger yourself? I can’t think of anything worse. Thus, Wade’s dilemma really gripped me – especially since the dynamic between father and daughter was really great. Breslin and Schwarzenegger have some great chemistry together (similarly to Schwarzenegger and Emilia Clarke in “Terminator: Genisys” – I guess having kids himself helped him with that), and both gave some really strong performances. Yes, that includes Arnold. He’ll never be the best actor in the world, but he’s really great in this. Very subdued, but you can always see the emotions lurking right behind his eyes. Also, his real-life experiences might have helped with a couple of scenes (like when he remembers his wife). Overall, I’d say that this was the best acting performance of his entire career so far – and in a role that you wouldn’t immediately associate with him. The last major asset of the movie is Henry Hobson, who shoots this with a lot of style, and offers a couple of beautiful and/or haunting images (with the burning cornfield a particular standout). It’s not perfect, though. I felt that the teenager-storyline didn’t reach quite the same heights as Wade’s story/plight did. I really could have done without the “evil” stepmom. And, finally, I’m also a little torn about the ending. On the one hand, it’s a beautiful way to end the movie, and was also quite original. On the other hand, I’m not sure if another conclusion (purposely staying vague in order to avoid spoilers) wouldn’t have been more dramatic – especially after all that build-up. My biggest complaint, though, was the saccharin fade-to-white, or rather, what came afterwards. I really wish they wouldn’t have done that. It was far too kitschy and didn’t really fit the great, dark and somber mood of the rest of the movie. So overall, it wasn’t quite the highlight that I was hoping for – but nevertheless I felt that it was a successful, worthy addition to Arnold Schwarzeneggers ever-growing filmography.
7/10