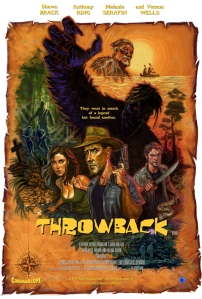 While I’ve written movie reviews for about ten years now (until a short while ago, however, exclusively in german), I only started this (english) blog in earnest a little less than a year ago. Now, slowly, the first screener-offers start to come in. The first thing that I write back when someone contacts me, is “giving me a screener will not guarantee you a good review” (which I kinda stole from Maynard’s “Horror Movie Diary”). In other words: I’m not in the habit of writing glowing reviews for shitty movies in order to get more free shitty movies – since that just seems counter-intuitive to me ;-). And while I would not call “Throwback” a shitty movie, it nevertheless is the first time that I have to make good on that promise, since while I can commend Travis Bain for his intentions, committment, and perseverance, I unfortunately cannot really commend him for the final product.

“Throwback”‘s first offence is that it never, ever, even remotely lives up to that glorious poster, which makes it look way cooler than it actually is. Its second problem is that its a monster movie without a monster. Now don’t get me wrong, I like getting teased as much as the next guy. It’s an integral part of horror movies, and I think that it’s a shame that many modern horror movies seem to have forgotten the art of the tease. The best example for me still is and always will be “Jaws”. Yes, the fact that we see the shark so late in the game may partly be due to the fact that the shark wasn’t working as well as they’d hoped, but whatever the reason, it builds up an enormous expectation – that is then also met when they ultimately, finally, show it to us in all its glory. Obviously, though, for a money shot like that you first and foremost need money, which Travis Bain didn’t really have here, so all that you ever get are glimpses here and there. “Throwback” is like a stripper: Teasing you, but without any pay-off whatsoever. Its third and biggest offence, however, was the way this was shot. I for one am extremely sensitive when it comes to a cheap digital look. I grew up with TV and movies, and since I was a little kid, this certain distinction between the way a movie and/or series looks, compared to how “Live TV” looks, is engraved in my brain. Which is why, after giving it a try with “The Hobbit: An Unexpected Journey”, I never ever in my entire life will go to another HFR-screening. Maybe it’s something about my eyes, or it’s because I’ve been programmed to see this distinction right away, but for me, this kind of look is extremely noticeable. Now I don’t know what camera was used to shoot “Throwback”. All I know is that it looks like it was shot with a regular hobby-filmmaker-DV-cam, and thus looks like an amateur holiday video. Thus, it never felt like a “real” movie to me. (And before you ask: Yes, I had a similar problem with “Public Enemies”, so this hasn’t really got anything to do with the fact that this is a low-budget-production.)

There are a couple of other problems, too. For example, I actually thought that the prologue of the movie was its most interesting part, and I wouldn’t have minded if we would have stayed in that time period for the rest of the movie. A) because it would have set it apart from all the countless other similar movies, and B) because there was a sense of fun and tongue-in-cheekiness to those scenes that I felt was sadly missing afterwards – where, in my mind, the movie took itself way too seriously. Also, the present-day-characters, unfortunately, weren’t all that exciting. They were hardly sketched out at all, and what little information we got about them made them feel rather clichéd. You have the good guy, the damsel in distress, and the crazy/bad/dangerous fellow. Jack is actually the one that gets the most attention, and thus at least partially comes off like a real person. Kent, however, seems like a caricature, and unfortunately, we never really learn something about his motivations, other than “If I kill him, I don’t have to share the loot”. And Rhiannon barely registers at all; I don’t remember one scene where we learn more about her than we already glance from the first shot of her, which shows us that she’s a ranger. And that’s it. I also never really felt any connection, let alone attraction, between her and Jack. Also, the acting is sub-par. Now, that’s something that I almost expect from an indie-movie like that, so it wasn’t a big deal, but it’s not helping the movie either. Same is true about some rather bad choices that the characters make. For example, there’s the scene where Kent gets handcuffed to a tree root, and after trying to free himself for a couple of seconds, he sees a big rock next to him. But instead of at least trying to cut the root first, he – without any imminent danger – rather goes ahead and smashes his hand. There’s also the scene where Jack hides from the Yowie under water, but when it finds him, instead of swimming away (it was established before that the beast doesn’t really like water), he stares at it like a deer stares into the light. I also didn’t understand some of the actions of the Yowie. Some people he kills right away, and others, he only hurts – or, in Rhiannon’s case, captures. And talking about Rhiannon – don’t even let me get started on her attack on Kent with a small stone, where she, instead of punching him again and again and taking away his gun, rather walks away after the first hit.

Finally, I’m also a little torn about Vernon Well’s cameo. On the one hand, it’s one of the best scenes of the movie, since there, “Throwback” comes alive in a way that it hardly ever achieved during the rest of the running time. On the other hand, his professional acting makes the amateurish performances of the rest of the cast only more noticeable. Mostly, though, his character ultimately has absolutely no impact on the plot whatsoever. You take him out, and apart from the smashed hand (which never really was brought up again anyway), nothing about the way the movie progresses changes. Which makes his appearance rather pointless (apart from the publicity his name on the poster and in the trailer generates, of course). Having said all that, “Throwback” nevertheless isn’t without its merits. As mentioned before, I really liked the first couple of minutes, which were set in the past. However, there are also a couple of nice scenes later in the game, like the one where Jack is stuck between a rock (Kent with a gun) and a hard place (the Yowie), while hiding under a tree trunk in the water. There is the occasional gag that hits home. The music was pretty good, too. And as much as it might have disappointed me that we never really got to see the Yowie (which, on the other hand, given the slim-to-none budget of the movie, might have been a godsend, since if they would have shown it, the movie would have probably fallen apart instantly), Travis Bain at least hides him in interesting – and varying – ways. Sometimes he’s hidden behind the characters or the trees, sometimes he’s out of focus, sometimes we only see a shape because the camera looks directly into the sun, and sometimes we just get to see a hand or a piece of fur because it’s an extreme close-up. All in all, the way he managed to hide it the whole movie without it getting stale was impressive. And, finally, while the movie – at least in my view – might suffer from the camera that was used, Travis Bain’s staging of his shots was flawless. There were a couple of nice images, taken from different and/or weird angles, that really stood out. He definitely knows where to put the camera in order to get interesting and/or impressive shots, and he also captures the beauty of the landscape really well. Ultimately, this was the part of the movie that showed the biggest promise. With a better camera, professional actors, and some help with the script, his next movie could very well end up being really good. “Throwback”, however, unfortunately didn’t really manage to impress me.
3/10

Travis Bain is currently collecting money on Kickstarter to finance his next project, “Starspawn”, an (in his own words) “H.P. Lovecraft-inspired sci-fi/horror film”. And despite my reserved reaction to “Throwback”, I decided to throw a couple of bucks his way (hopefully he’ll use them to get a better camera 😉 ). Maybe you wanna follow my lead? Also, if you love indie- and/or creature-horror movies, and aren’t such an uptight snob such as myself when it comes to a noticeable digital look, you might want to consider buying and/or renting “Throwback” after all (despite my less-than-glowing review), which is currently available on DVD/Blu-Ray in Australia, England, Canada and the US. And if you do, please consider telling me what you thought about it in the comments.