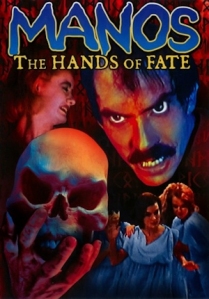 Yep, that was indeed pretty terrible. “Manos: The Hands of Fate” has a 1.9-rating on IMDB, and is currently featured as #14 on their Bottom 100-list. And deservedly so, I might add. It’s definitely one of the very worst movies that I’ve ever seen in my entire life, and to my big disappointment, it isn’t even “so bad it’s good”- or “guilty pleasue”-bad like, say, “Jaws: The Revenge” or “Battlefield Earth”. Those at least have a certain trashy charm, even though no one would ever mistake them for anything else than what they are, which is pretty terrible, catastrophic movies. But at least, they’re not boring. Annoying, mind-boggling, excruciating, inconcievable, stupid, and face-palmingly terrible, perhaps, but not boring. “Manos: The Hands of Fate”, on the other hand, is all that, and on top of it, also extremely dull and tiresome. Thus, I’d rather watch three double features of those two beforementioned movies than to have to suffer through just one more showing of this unbearable drivel.

Now, to be honest, for the first 10-15 minutes or so I had some hope that “Manos: The Hands of Fate” would fall into a similar “bad, but in a good way”-category for me, since I found the level of incompetence that’s on show here from frame one, quite amusing (at least for a little while). The terrible, odd, far too cheerful music; all those scenes with the landscape going by, shot from out of the car (which were probably only there to stretch the running time a little bit), the kinda-funny line of the cop (“If you’re running late, you should have started earlier.”), and, of course, all those portentously shots of people staring at each other, which actually had me laugh out loud. So overall, “Manos: The Hands of Fate” was off to a good start – “good” insofar as I thought that despite it being really bad, it could still be entertaining (albeit unintentionally so). However, once they entered the house, it started to fall apart pretty quickly. While the incompetence remains, somehow all the fun that could he had in the first 10-15 minutes was suddenly gone. Well, ok, the scene with the dog was quite nice, mostly because a) it was sooooo clichéd and b) it missed the mark (of being terrifying or sad) so considerably that it was quite funny.

Unfortunately, after that, there were only a couple of similar unintentionally entertaining scenes (like Torgo’s “He wants you for his wife” – which lost all potentially threatening impact because of the mood-killing music) – the rest was just boring beyond belief, and once The Master awakens, I was ready to call it quits, since I had already had enough of this movie. However, I soldiered on, suffering through that terrible scene with the endlessly bickering wives (where Harold P. Warren’s incompetence again was extremely noticeable, in the way that their voices suddenly stopped whenever the Master was shown; or when you only hear one wife speaking, even though you can see the lips of all of them move), the senseless bitch fight in the grass, that totally unnecessary scene where one of the wives pays Michael a visit, the weird scene where they seem to try to caress Torgo to death with their hands, or the weird-as-fuck and totally incomprehensible ritual, where Torgo should supposedly be sacrificed, and the Master takes his hand, puts it over the fire, and suddenly there’s a cut, and he holds the burning, severed hand, while you can clearly see Torgo run away in the background (far faster, btw., than he walked before all the time, due to his deformed legs). What. The. Fuck?!?!

As expected with a movie like that, the acting (if you can call it that) is pretty terrible all around, as is Harold P. Warren’s totally incompetent direction (there’s this phrase “he couldn’t direct himself out of a box”, and after having seen “Manos: The Hands of Fate”, I could swear that it was coined in his honor). He has no idea how to stage the shots, how to direct his actors, where to put the camera, how and when to cut, how to create suspense (or any kind of mood, for that matter), and so on. Seriously, “Manos: The Hands of Fate” is shot so incompetently, even Ed Wood would blush in shame. I also have to mention the music again, since most of the time, it so totally doesn’t fit the tone of the movie that it’s baffling. Even during later scenes which are supposed to be thrilling, it’s still quite cheerful and far too light. And when Russ Huddleston and Robert Smith Jr. finally try to create some sort of suspenseful music, they fail miserably. Overall, their music is a major part of why “Manos: The Hands of Fate” never ever even remotely works.

Granted, it’s not all bad-bad. The Master’s costume is actually something that has to be seen to be believed. The thought that someone actually thought that that was a good idea is mind-boggling. Also, the scene were the family runs away, only to then decide that it would be better to get back to the house after all, since they’re being followed, and surely no one would think that they’re actually so stupid as to go back, is unintentionally hilarious. Plus, there were actually two things close to the end that I liked. The first is the scene with The Master and his main/first wife, who defies him, which I actually found quite effective. The other is the bleak ending that even though it totally missed its shocking impact with me due to the fact that the entire movie was so terrible that I couldn’t have given less of a fuck about how it ultimately ends, still took some guts to conceive and shoot, so at least for this very little teenie tiny bit, I have to give kudos to Harold P. Warren. However, that doesn’t make the movie any less excruciating.

At least one good thing came out of this rather unfortunate experience, though: I now feel sufficiently “Project Terrible”-deflowered to calmly face the rest of my assignments. I mean, it couldn’t possibly get any worse. RIGHT?!?!
1/10

8 Responses to Project Terrible: Manos – The Hands of Fate