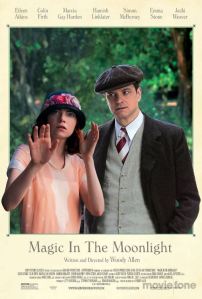 Granted, “Magic in the Moonlight” is extremely light movie fare – but it’s also quite charming, often funny and very entertaining. The chemistry between Emma Stone and Colin Firth was so good that I didn’t even have time to contemplate the age gap between them. I just wanted them to end up together, despite their differences and all the obstacles that stand in their way. Colin Firth is again his best, most charming self, and Emma Stone continues to impress me not just with her natural beauty, but also with her lovely and loveable presence as well as her acting abilities.

As we’ve come to expect from a Woody Allen-Film, the dialogues are witty and very well written. I also quite liked the story, about a magician who sets out to reveal this allegedly gifted girl as a hoax, only to fall for her charms, and also unable to explain how she does the things that she does – until he, the biggest sceptic of them all, starts to become a believer. The way the movie ultimately resolves this was great, too. I also loved the period setting, which is not only represented in the costumes, hairstyles, sets, cars etc., but also the music, which is exclusively taken from that era. The movie itself is also quite old-fashioned, and recalls the screwball comedies of the 30s and 40s. Yes, the whole movie is extremely predictable, but as long as the journey is as nice as it is here, I don’t really care that much if I can already glance the destination from miles away. Ultimately, “Magic in the Moonlight” might not be Woody Allen’s best, not even if you only count his more recent outings (for me, that’s still “Midnight in Paris”, which while similarly charming also had some nice things to say), but that doesn’t make it any less charming, funny and/or entertaining.
7/10