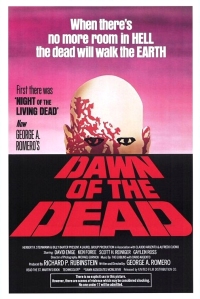 “Night of the Living Dead” was the first movie that I saw at this years horror retrospective at the Austrian Filmmuseum; thus, it also was the movie that started off this years “/slash”-seaon for me. So it’s only fitting that the last movie that I watched at the retrospective – and that now also closes my coverage of this years /slash Filmfestival – is its follow-up. I had seen this movie about 10-12 years before, but I think it was a mistake to watch the so-called “Ultimate Final Cut” (the longest one available) first, because the pacing is way off. Also, back then I simply expected something else. Something more scary and less satirical. This time, knowing what awaited me when going in, I enjoyed it much more.

“Dawn of the Dead” is considered to be George A Romero’s masterpiece, but while I really really like it (at least in its European Cut), I wouldn’t go quite that far. There are a couple of things that you can fairly criticize, I think. Like the look of the zombies. They worked great in “Night of the Living Dead” because it was black and white, but here, it’s obvious that zombie makeup effects have come a looooong way since then. The blue zombies looked especially weird to me, and overall, I didn’t find their appearance to be especially scary. I also think that the movie, even in this shorter cut than the one that I saw back in the day, takes a little bit too long to get to the mall. Some on-screen deaths didn’t quite hit me as much emotionally as I would have liked. And, like in many horror movies, there were some scenes where the actions of the protagonists didn’t seem particularly clever.

Apart from that it’s a great horror flick, though. For whatever reason, I could appreciate the satire and its commentary on consumerism much more this time around. I also think that one thing that put me off back then was that it’s more funny than scary sometimes. Scenes like them walking through the designated line on their way to the checkout – in the totally empty store – had me laughing my ass off. The only funny moment that I still don’t like, and wish they would have skipped, is the cake-throwing. It’s a little difficult to take the zombies serious as a threat after that. Other than that, the movie worked for me this time, thus I found it much more entertaining. And even though the scary moments are far and in between, there definitely a couple of really tense moments scattered throughout. What I like most about the movie, though, is its concept. This general idea of hiding in a big shopping mall during a Zombie apocalypse. It’s genius, really. You’ve got everything that you need right there.

However, as with almost every paradise, it doesn’t last forever. There are those out there who begrudge them their “home”, and want a slice of it. As aggressive and despicable as those attackers might be, however, it bears noticing that the mayhem only really starts when Stephen comes out of hiding and decides to “defend” their home, instead of just riding it out. If he would have just kept quiet, they might have been able to clean up and hide again – at least until the next raiding party came around. Instead, it all went straight to hell. It’s very interesting because Stephen starts off like this useless wimp, then – thankfully – grows over the course of the movie as a person, learning to defend himself and the others. But ultimately, he’s overcompensating for his previous behavior, and in the end, his progression to a more “manly man” is what proves to be their downfall. I also really loved the dynamic between these characters – the pregnant woman, her boyfriend and those two hard-bitten cops – and the way it progresses during the course of the movie.

Overall, “Dawn of the Dead” is a very entertaining zombie movie that comes with a bite, and that offers more social criticism and satire – and thus a lot more food for thought – than your regular brainless horror flick.
8/10

This entry was posted in cinema 2014, movie reviews and tagged Dawn of the Dead, filmmuseum, George A. Romero, horror. Bookmark the permalink.