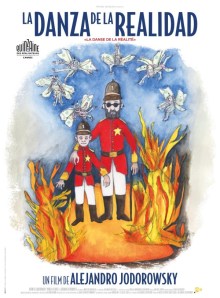 Given the fact that I’m not the biggest fan when movies get too weird and surreal (as you might have noticed already), I’m probably the worst possible person to review this movie. So please take it with a grain of salt when I tell you that “La Danza de la Realidad” (my first Jodorowsky-movie, by the way) is a two-hour movie that to me felt like a three-hour movie. In the interest of full disclosure: It probably didn’t help that I was rather sick that day, possibly even running a fever (even though one could argue that in this case, which sometimes feels like a weird fever dream, that might actually have worked in the movie’s favor). If this and “Escape from Tomorrow” would have switched places in the screening schedule, I very well might have skipped “La Danza de la Realidad” altogether in order to get a little rest. Especially since it didn’t really sound like my cup of tea in the first place. But they weren’t, and I didn’t, so here we are.

(For the rest of this review, please pretend that I’m singing this to you. If you wonder what my voice sounds like, think of a musically illiterate Daffy Duck, but without the lisp.)

Oh, dear reader, this movie. What can I say about this movie? It was so weird, a strange combination of surreal and (seemingly) autobiographical elements. But most of the time, at least to me, it was very unclear where the autobiographical ends end the surreal starts (Well, mostly. I’m pretty sure the scene were Sara heals Jaime from the plague with a blessed golden shower didn’t actually happen like that. Call me a heathen, but I just don’t buy it). Which for some, might be fascinating, but I couldn’t really get into it. That I couldn’t relate to any of these characters obviously didn’t help. I especially had a hard time with Jaime, Alejandro’s father. I get that he kinda has to start off at his very unsympathetic place, in order to have the chance to grow over the course of the movie, but by the time that he starts to do just that, he pretty much already lost me. Especially with the bit at the dentist (the only scene at this years festival where I had to look away). That was just diabolic, man. Even Jigsaw wouldn’t do that.

Now, I get what Jodorowsky tried to do here, and on a pure artistic level, I can appreciate it. He shows you a part of his youth, but in an exaggerated, distorted way that either represents the way that he remembers it, or the way his younger self has seen and experienced it (I can’t decide which, and I think that question is wide open for debate). Thus, everything’s kinda twisted, and you get surreal, heightened elements like all those cripples, the papier-mâché tanks, or the fact that Sara’s singing all the time. I also don’t wanna trash it completely, since it undoubtedly had its moments. I loved the hilarious nazi-fight (with the aforementioned tanks), and there were other bits and pieces that I really liked. But overall, I found it to be rather tedious and arduous, and I’m pretty sure that I would have found the documentary “Jodorowsky’s Dune” far more interesting than this. Still, if you’re a fan of the weird and surreal, you should definitely follow Jodorowsky’s invitation to this strange and crazy dance.
4/10