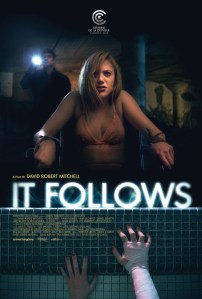 “It Follows” reminded me a little of “The Ring” (or the Japanese original “Ringu”), only that in this case, the threat is not about some video tape, but works more like an STD. You screw, you’re screwed. Which might sound like the most classic and clichéd horror film rule, but here, it comes with a twist: If you have sex with another person, you pass the curse on to them. A nice concept in theory, but I had some problems with the way it was handled here.

First of all: Where “The Ring” spent a huge part of the movie figuring out how the curse works, and what you have to do to break it, “It Follows” presents those facts pretty much from the get-go. Thus, I felt that there wasn’t really any tension – apart from the fact that Jay didn’t believe it at first, which is understandable. But as soon as she did, I started wondering why she didn’t just go and get laid. She’s young and hot, so finding a guy to get biblical with shouldn’t be much of a problem. Thus, it seemed like the only thing holding her back – and the only reason why she’s still threatened by IT – is herself. I get that there are moral considerations that come into play here, since you pass IT along, but the movie didn’t really delve into that. Mind you: It’s not the fact that she doesn’t simply have sex with someone that annoyed me, but rather their failure to address her reluctance to do so.

What also didn’t help the movie is that they later break with a previously established (or at least mentioned) rule. When Jay first learns about the curse, the guy warns her to never ever let IT touch her, implying that one simple touch is already enough to kill her. Which – even though IT moves terribly slow, and you’re pretty much only in danger if you don’t pay attention, or are asleep – is a scary concept. One touch, and you’re done for. But later, IT touches her hair and she still survives (maybe hair and/or clothes don’t count, maybe IT has to touch flesh. But if so, it’s never mentioned). While we’re at it: The sex. Does it have to follow the Clinton-definition (e.g. it’s not sex as long as it doesn’t feature penetration), or is a little oral action and/or foreplay already enough? Where is the line drawn exactly? You have to tell us these things, man! I mean, I wouldn’t wanna catch IT! Seriously, though: The fact that I actually thought about things like that already shows you that it didn’t manage to grip me, at least not throughout the entire movie.

It doesn’t help that while the setup is pretty much clear from the beginning, the movie nevertheless makes time for Jay’s search for the guy who infected her, and for another meeting with him where we get bits and pieces of additional information, but mostly, it’s just a repetition of what we already know. Skipping or at least shortening this part would have gone a long way to tighten and thus intensify the movie. That said… it has it’s moments and strengths. As said before, I actually like the concept behind it. Also, even though I may not have found IT particularly frightening, the way Robert David Mitchell shot IT definitely gave it a creepy feel. There are a couple of tense moments. And I especially liked the last third of the movie, after Jay wakes up in the hospital, finally doing what she should have done long ago. The movie takes a nice turn afterwards, and in my opinion, the scene at her neighbour’s house was one of the most effective of the movie. I also quite liked the “showdown” at the indoor swimming pool. Oh, and the performances were very good, especially Maika Monroe. “It Follows” is far from being a bad movie – but in my opinion, it’s also not quite as good as it could have been.
6/10