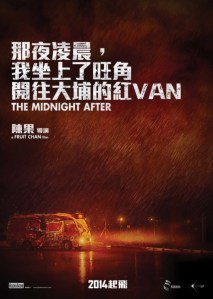 “The Midnight After” starts off very promising. I love how the various protagonists are intruduced, and for whatever reason find their way unto this specific bus out of Hong Kong. Then, suddenly, after driving through a tunnel, it seems like there’s no one else on the street. Everyone seems to have vanished – expect this one bus and its passengers. What’s going on? Was there some sort of catastrophe? Did they have an accident and are already dead? Does it have something to do with Fukushima? Is the one crazy hand reader-lady right that the end of the world has come? I really digged the setup. I also quite liked the very different characters, and the dynamic between them. And their first approach on how to deal with this – they all go home, but before they do, they exchange contact information just in case there really is no one else around anymore, except them – was actually quite nice and clever. I also liked certain, specific scenes, the great, dreadful mood… and the pictures of a deserted Hong Kong were quite impressive and haunting.

Unfortunately, every mystery is just as good as its resolution, and that’s where “The Midnight After” drops the ball completely. There simply is no resolution. Like, at all. They play around with a couple of possible explanations, but ultimately, this is one of these movies that leave its audience with all questions, and no answers. Why do some of the passengers die in quite mysterious, strange ways? What’s up with the young woman from whom one of them always has visions with her hairs standing up? Who are the people in the gas masks, how did they get there, and what do they want? Who is calling them all the time? And what about the weird phone call that the one young dude receives from his girlfriend, who wasn’t on the bus? What starts off with a nice, clever setup, unfortunately deteriorates more and more into this hodgepodge of ideas that don’t add up to a coherent whole, and which left me completely unsatisfied. Hell, they don’t even [SPOILER]make it to the mountain[/SPOILER], for fuck’s sake. That’s like fading to black afrer Frodo and Sam started their hike up Mount Doom.

Now, even in the later half of the movie there are a couple of nice moments and/or funny scenes. I liked everything about the knifes – first the huge one, then the small one. The way how they deal with an abhorrent crime among their midst was actually quite nice (if not terribly original), especially since even those that don’t agree with that course of action seem compelled to participate (even though that whole sequence went on for far too long). The best scene of the entire movie, however, is the crazy clip when they play “Space Oddity” for the first time. That was hilarious. Unfortunately, over the course of the movie, they play it again and again, until they achieve something that I never would have thought possible: “Space Oddity” actually get’s dull. Which also is some sort of an accomplishment, I guess. Anyway, given the disappointing way the movie progresses and ultimately ends, “I Can’t Get No Satisfaction” would probably have been a more fitting title song for the movie.
4/10

This entry was posted in /slash, cinema 2014, movie reviews and tagged Fruit Chan, Hong Kong, mystery, The Midnight After, thriller. Bookmark the permalink.