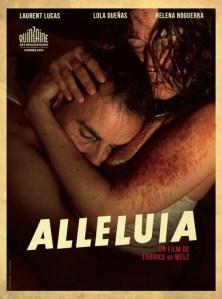 “Alleluia” was this years “Hail” for me: The one movie at the festival that while I cannot really call it bad per se, I nevertheless didn’t have any use for, mostly because I – thankfully! – couldn’t relate to the world and/or mindset of these characters. Michel is a manipulating bastard who seduces and fleeces lonely women, and Gloria, while being one of his victims, still falls for him and decides to help him with his scams from now on. I know that there are women like Gloria, who stay with their lying, cheating and sometimes flat-out violent husbands, in real life too, but it’s just something I cannot relate to at all.

If there’s one interesting thing about the movie, it’s how the power starts to shift after the first kill. I have to say that I quite enjoyed that. Also, there are a couple of funny moments and ideas, like the scene where Gloria breaks out laughing while pretending to cry, or the dirty, slutty nun. However, after kinda winning me back again at least a little, “Alleluia” unfortunately completely lost me in the end, when it get’s clear that Michel is just as transfixed with Gloria, as she is with him. Which, at least for me, came out of nowhere. I just couldn’t understand why he would ruin what probably was his first real chance of happiness, just because she asks him to. At least for me, this scene didn’t work for me at all, because the movie simply did nothing to make me understand his decision. Anyway, as said before, I wouldn’t necessarily call “Alleluia” a bad movie, but I just didn’t get any of the characters, and found them to be mostly insufferable.
3/10