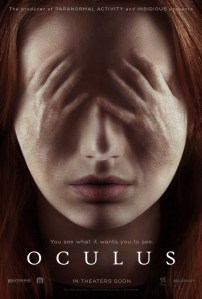 There were a couple of things that I liked about this movie. There were some nice scenes that played with mirror reflections, the performances were good (I heard some bad things about Karen Gillan before going in, but have to say I don’t agree with them; I think some people may be irritated by her deep voice, which can sound a little flat, but overall, I thought she gave a decent performance), I liked the general idea about some sort of cursed, soul-eating mirror, and thought that all the preparations that Kaylie took before she confronted the mirror were a nice idea. It’s biggest strength for me, though (at least for a while), was the clever way “Oculus” played with the question of what’s real and what’s not. The standout for me definitely was the scene with the apple and the light bulb. Unfortunately, even that nice idea lost it’s appeal rather quickly (and was later used, to my huge disappointed, for a worn-out genre trope that I just can’t stand anymore: [SPOILER] The accidental killing of a friend [/SPOILER]).

By far its biggest weakness, at least for me, were the neverending flashbacks. “Oculus” constantly shifts between the past and the present, and while some of those transitions may be done rather nicely, in the end, the flashbacks were just too extensive for me, taking up far too much runtime of the movie. We pretty much know what happened back then after the first couple of minutes, but that doesn’t stop Mike Flanagan and his writing-buddy Jeff Howard to let it play out in front of our eyes in every small detail. I found those scenes, especially as drawn-out as they were, extremely dull. Furthermore, the flashbacks, the interweaving of the past and the present as well as the question of what’s real and what’s not really get out of hand during the finale, to a point when I simply had no idea what was going on anymore – thus, I kinda tuned out, and lost all interest in the movie.

Around the middle mark, they play with the idea that Kaylie might be crazy, and that it’s all in her head. Given the fact that they presented this idea that early in the movie, it was clear to me right away that “Oculus” wouldn’t go that route, but looking back, I think I would have preferred that revelation to the movie – and the ending – that we ultimately got. The way it is, I found “Oculus” to be a rather bland affair.
4/10

This entry was posted in /slash, cinema 2014, movie reviews and tagged horror, Oculus. Bookmark the permalink.