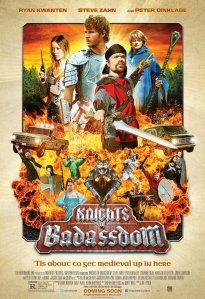 “Knights of Badassdom” starts out pretty strong, with two friends carrying off Winston, who just got dumped by his girlfriend, to a huge LARP-event. They do a good job setting it up, introducing different characters, and make LARPing look like a lot of fun. I don’t think that “Knights of Badassdom” needed the supernatural angle; just show us this guys fighting on a LARP-quest. At least for me that would have been more than enough, but I guess they felt that the stakes wouldn’t have been high enough. Thus, they included a demon, and I believe that as soon they introduced it, the movie got worse and worse with every passing minute. First of all: While it’s definitely mostly a comedy, the demon kills one LARPer after the other, and in the end Winston and his friends stumble upon a field of dead bodies. And even after that, we’re supposed to laugh with and about the movie, with a totally weird, over the top showdown. When doing a horror comedy, it’s really difficult to get the tone right, and I strongly believe that “Knights of Badassdom” mostly failed on that regard.

What I liked: The cast is good. Peter Dinklage is great in everything, of course (even though his role here isn’t even half as good as Tyrion Lannister), and it’s always good to see Summer Glau. I also loved that the character who was kind of a dick didn’t become a demon worshipper or anything, but actually worked with the good guys. That (positively) surprised me. There are a couple of funny scenes. I enjoyed this little look into the world of LARPs. And the dragon in the end was hilarious. I also think that as much as I hated the demon-angle, at least his first appearance as Winstons ex-girlfriend was well done. However, he then changed into this monster, and that didn’t work for me at all. Also, the showdown fell completely flat for me. I guess it was supposed to be this funny, kick-ass moment, but it didn’t do anything for me, and given the fact that there were almost no cheers in the audience, my guess is that I wasn’t alone in that. So overall, unfortunately, “Knights of Badassdom” was more miss than hit for me. +4 for Peter Dinklage, Summer Glau, the promising start and the funny (but respectful) LARP-scenes.
4/10