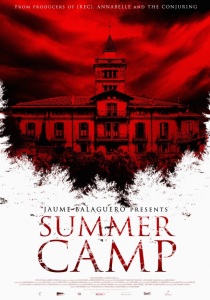 “Summer Camp” is the feature film debut of Alberto Marini, who was one of the Executive Producers of the “[Rec]”-movies, as well as the writer of the really good and very creepy “Sleep Tight”. “Summer Camp” doesn’t quite reach the same heights, but it’s a valiant effort that offers a couple of nice twists to a seemingly worn-out formula, and which I found to be quite entertaining.

First of all: If you’re looking for a terrifying, downbeat, disturbing movie – you’ve come to the wrong place. Even though it’s not really a slasher – despite the associations that the title inevitably brings – it’s very much in the tradition of movies that want to equally scare and entertain its audience. There are quite a few gags in here – some of which I found absolutely hilarious – but without it ever turning into a straight-out comedy. It’s not “Final Girls” or “Cooties”. It’s still a horror thriller at its heart – but one that, first and foremost, wants you to have a good time. And apart from a fairly slow start and the rather one-dimensional characters, it’s a goal that “Summer Camp” mostly achieved, at least when it came to me. There are quite a few interesting, unexpected twists and turns, as well as a couple of intriguing new ideas – the biggest one being that you’re only infected for a certain amount of time, before getting back to normal again. That alone carries with it a couple of nice implications. For example, when you kill a zombie, you’re a hero, and there’s not really a reason for you to feel remorse. However, when you know that these people will come back again in a very short time, you lose the simple solution of just killing them, which made things quite interesting. Not to mention the fact that once you come back, you have to deal with what you did while you were in rage-mode.

There’s also a nice mystery concerning the question what’s actually causing it, including a couple of effective red herrings. Also, even though the characters might be sketched rather thinly and one-dimensional, I still found them interesting, especially Christie. Yes, she’s far from being sympathetic, but I liked how completely out of her depth, how cowardly, useless and selfish she was. Definitely not your typical, clear-cut hero. And as much as we’d like to think that in a crisis like that, we would all be our best possible self, I’m cynical enough to strongly suspect that many of us – possibly including me – would be very much like her, if we’d ever find ourselves in a situation like that. Also, despite all the humor, there also were quite a few tense moments, and while Alberto Marini uses quite a few jump scares (something that I’m not especially fond of), at least most of them were implemented rather well. If there’s one thing I’m not completely sure of – apart from the slow beginning – it’s the ending. On the one hand, it was a nice twist. On the other hand, I think I would have preferred a different outcome. It also doesn’t help that the first scene of the movie, once again, pretty much gives away how it’s ultimately going to end – something that I absolutely hate. And even though I wouldn’t have thought of it myself, it was pointed out to me afterwards that the protagonists completely overlook an easy solution for their dilemma that they just had used a couple of hours before. And the way one character died was a little bit too predictable (and I didn’t like how Marini pretty much played it as a joke). So yes, it wasn’t perfect, but apart from these weak points, I had a really good time with this “Summer Camp”.
7/10