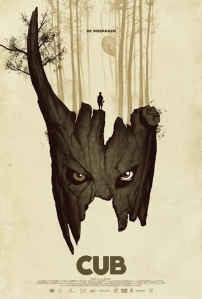 “Welp” starts off rather promising. While the setting in the woods is very familiar by now, the scout-angle gives it a touch of freshness. The fact that most of the people who are in danger here are kids also sets it apart from your typical (teenie-)slasher-movie. I also liked the slow build-up, the first couple of scenes with Kai (who looked really great and quite scary), and the rather bleak, uncompromising scene when the truck enters the camp and the shit hits the fan. And overall, the movie is very well shot, offering a couple of nice images and some effective, tense moments. However, during the last half hour or so, “Welp” totally fell apart for me.

Not that the first hour would be without problems, mind you. The whole dynamic within the scout-group felt rather clichéd. Also, from a pedagogical point of view, the scout leaders were mostly terrible, and seemed to be incredibly incompetent. And I didn’t really manage to make any sort of connection with Sam – which, given that he’s the main protagonist, was a major problem. It also didn’t help that the movie was rather predictable at times. After 20 minutes I already had a strong suspicion where this was ultimately going, and instead of surprising me and proving me wrong, I was absolutely right. All that, however, could have been forgiven. The last half hour, though, was disastrous. Either I’m too stupid to get it, or the movie didn’t offer up any sort of explanation for the many weird things that are happening, like: What are those busses doing underground? What is the purpose of all those traps (as well-thought out they may be)? What is the motivation of the bad guy(s)? Why are they doing this? If the movie offers up an answer to any of these questions, I missed it.

My biggest problem with the movie, though, was that I didn’t understand Sam’s journey (as a character) at the end. The fact that I knew fairly soon that this is where things are going didn’t make it any less baffling for me. Unfortunately, the movie completely failed to make this development seem plausible to me; thus, it felt like a shock for shock’s sake, instead of feeling logical and earned. Ultimately, I just didn’t buy it, and at that point, the movie lost me completely. Despite that, I can’t trash “Welp” completely, since there were a couple of nice scenes in the first half, and it’s very well shot all-the-way. But the ending pretty much ruined it for me, and the fact that we weren’t given any explanation about anything at all, made it feel rather nonsensical and pointless.
5/10